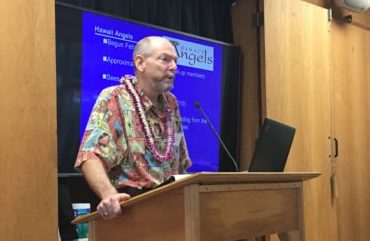 KBG had a terrific networking luncheon held in October at Pohai Nani. Rob Robinson of Topaz Management in 2010, Kolohala Ventures gave a fantastic presentation on the world of “Angel” Investing. The KBG team was very proud to recognize the Sailor and Marine of the Quarter on Wednesday with 2 awards and two goodie bags. A big thank you to Corporal Chad D. Moyer and Lance Corporal Mikal C. Volpe, and all of our military personnel for their service.

An angel investor is a person who invests in a new or small business venture, providing capital for start-up or expansion. Angel investors are typically individuals who have spare cash available and are looking for a higher rate of return than would be given by more traditional investments. He spoke about the pros and con’s on using investors in business. The big advantage is that financing from angel investments is much less risky than debt financing. Unlike a loan, invested capital does not have to be paid back in the event of business failure. And, most angel investors understand business and take a long-term view. Also, an angel investor is often looking for a personal opportunity as well as an investment.The primary disadvantage of using angel investors is the loss of complete control as a part owner. Your angel investor will have a say in how the business is run and will also receive a portion of the profits when the business is sold. With debt financing, the lending institution has no control over the operations of your company and takes no share of the profits.

Rob Robinson co-founded Topaz Management in 2010, Kolohala Ventures in 2006, is founder / president of Hawaii’s angel investor network, Hawaii Angels (2002), and serves as a senior mentor at Blue Startups, Hawaii’s premier tech accelerator. He is co-author of Angel Investing: Matching Startup Funds with Startup Companies (2000), and is a charter member of the Angel Capital Association out of Kansas City. The various funds and organizations that he has headed have invested over $120MM in mostly Hawaii-based companies since 2001. Dr. Robinson grew up in South Africa, earning a Ph.D. from Stanford University in 1991. He spent ten years on the faculty of Harvard Business School, and in 2001 was recruited to the University of Hawaii as Entrepreneurship Chair and the Director of the Pacific Asian Center for Entrepreneurship. He serves on the board of the Hawaii Venture Capital Association, as well as on the boards of other non-profits and a number of startup companies that his funds have invested in.