A Tribute to a Founding KBG Member Evans Yim. 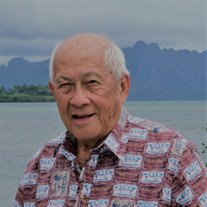 Evans is the son of Yim Lun Chee and Chun Shee of Lin’s Supermarket. He and his wife, Barbara, have five children: Gwyneth, Janis, Ernie, Paul, and Merle, as well as eighteen grandchildren. Evans is the second person to be honored with the “Lifetime” membership in the KBG. He is an active member, past president and past Regional Deputy District Governor of the Kaneohe Lions Club. He is also an active member of St. Ann’s Church.  Evans, with the help of his fellow Kaneohe Business Group Members, accomplished the following:

Evans was a pioneer in the development of Kaneohe. He enjoyed the beauty and natural resources. He recalls when the streams were flowing with fresh shrimp, fish, and crawfish. People were able to live off the land. He also remembers when Kaneohe Bay was one of the most beautiful places for fishing and water sport activities.

Despite his enthusiasm promoting growth in Kaneohe, he also did everything in his power to preserve the natural beauty of the land. He organized community and business groups to pursue a development plan by hiring George Houghtailing to prepare a “master plan” for Kaneohe. Although the plan was never fully implemented, it did define the business, industrial, and residential areas.The plan had called for another street to be parallel to Kamehameha Hwy., ocean side from Lilipuna Road to Kaneohe Bay Drive, to help with the traffic along Kamehameha hwy.

He encouraged  the development of the industrial area but wanted the apartment complexes on the mauna (mountain) side of Kahekili Hwy. Although we needed a court house, he preferred it to be located in a “ civic center” near the police station, fire station, and library instead of its present location on Kahuhipa Street in the industrial area.

As a civic minded community leader Evans, along with Edgar Jones and others, pushed for the first branch of a Satellite City Hall, and were instrumental in acquiring the land for the Senior Center, and the Kaneohe District Park. They were also behind the development of Windward Mall, Windward Shopping Center, and Kaneohe Bay Shopping Center. They urged the State to widen Kamehameha and Kahekili Highways. Evans enabled the U.S. Post Office to establish an office in Kaneohe, which later expanded into a regional post office. Naturally the developments took several years of planning and hard work before they would be completed.

(Editorial courtesy of the “History of the Kaneohe Business Group” Complied by Janis Y. Chun and Printed by First Hawaiian Bank.Copyright and Printed March 1999 )

Evans Hong Moon Yim, 97 of Kaneohe died peacefully on Oct. 6, 2018 and has joined his wife Barbara for eternity.

Evans received many distinguished awards during his active life. The State Legislature honored Evans by the Neighborhood Board recognizing him as the Outstanding Citizen of the Millennium in 2001 and “Honorary Mayor” of Kaneohe in 2003. He received the Paul Harris Award from the Rotary Club of Kaneohe for his community service in 2009 and Distinguished Kama`aina of Kaneohe Bay award from the Ko`olaupoko Hawaiian Civic Club in 2011. He always called Kaneohe, “God’s Country”.